Medford, Ore. (January 22, 2021) – 14-year-old Ashton Torgerson led the way for Torgerson Racing on Saturday at Adobe Mountain Speedway in Glendale, AZ as he took over the points lead in the NOW600 Cactus Region with a second-place effort. 17-year-old Austin Torgerson finished fourth as well, kicking off the 2021 season in strong form as the team aims for a busy year across the country.

Torgerson Racing completed 2020 with 19 total wins with triumphs at Delta Speedway, Dixon Speedway, and Lemoore Raceway in Northern California, Adobe Mountain Speedway in Arizona, and in karts at Phoenix.

Austin Torgerson led Saturday’s qualifying against a 24-car turnout, timing in with an 11.627 lap while Ashton was seventh quickest. Ashton won the third heat race aboard his #02 Ten-J Chassis while Austin finished just behind him in third in the #88 powered by Adams Performance.

The 2021 season for Torgerson Racing will see them continue to challenge for the championships at Adobe Mountain Speedway all season long including competing in the upcoming Western States Championship in February. The Sooner 600 Week with the NOW600 Lucas Oil National Championship Series will see five consecutive nights of racing in June.

A busy slate of California races will occupy the teenagers throughout the summer before special events in the fall. The Mark Hagopian Memorial, Cal Cup, and other significant events loom large at the conclusion of the 2021 campaign. 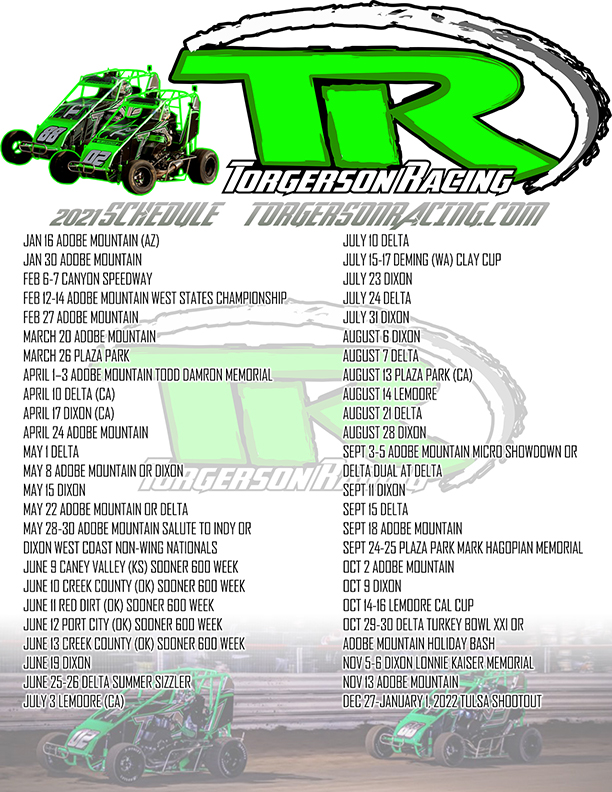